Harvest Of Goals For Nigerians Abroad 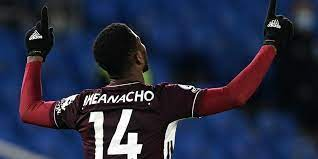 Several Nigerians abroad fared well as they appeared on the score sheet over the weekend. Let's check them out.

Kelechi Iheanacho scored a brace but it was not enough to hand Leicester City any point as they lost 3-2 to a West Ham United at the London Stadium in the English Premier League on Sunday, which put a dent in the Foxes’ bid to qualify for the Champions League, with just seven games left.

At Craven Cottage, Ola Aina and Josh Maja were in action for relegation-threatened Fulham, who lost 1-0 to Wolverhampton Wanderers on Friday. Aina was on for 84 minutes before coming off for Ivan Cavaleiro, while Maja came on for Harrison Reed in the 74th minute. Their compatriots Tosin Adarabioyo and Joshua Onomah were unused substitutes. 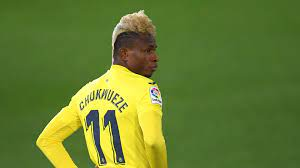 Samuel Chukwueze was in action for 32 minutes but could not save Villarreal from a 2-1 home loss to Osasuna in the Spanish La Liga on Sunday.

Striker Victor Osimhen scored in Napoli’s 2-0 win at Sampdoria in the Italian Serie A on Sunday. The striker, who was on for the entire duration, netted the second goal in the 87th minute to put the game to bed. Simy Nwankwo thought he had handed Crotone the winner when he put the visitors ahead in the 78th minute but two quick goals in the 89th and 92nd minutes gave hosts Spezia a 3-2 win.

Terem Moffi ended his seven-game drought, scoring a consolation goal for Lorient as they suffered a 4-1 loss in the hands of Lens in the French Ligue 1 on Sunday.

Striker Paul Onuachu scored his 27th league goal of the season to help Genk to a 4-1 victory over St.Truiden in the Belgian topflight on Sunday. The lanky forward has found the back of the net four times in his last five league games and is currently top of the scorers chart in Belgium.

Kayode Olanrewaju scored his second goal in 25 league games in Sivasspor’s 3-1 win over Konyaspor on Sunday.