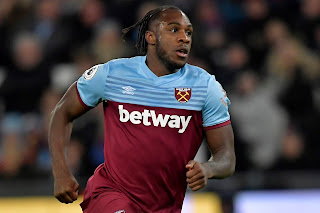 News reaching us is that the West Ham striker, Michail Antonio, has cut ties with England, officially pledging his international future to Jamaica. Antonio’s parents were born in the Caribbean island and he chose it over England in a bid to play more international football matches, having missed out regularly on England squads of late.

Antonio is the first to confirm his place in the Jamaica squad, amongst some of the English stars Jamaica FA were making plans to recruit ahead of next year's World Cup in Qatar. Some others on the list are Demarai Gray, Max Aarons, and Liam Moore. Jamaica are also hopeful that they will persuade Isaac Hayden, Andre Gray, Ethan Pinnock Mason Holgate, Kemar Roofe, Rolando Aarons, Curtis Tilt, Jamal Lowe, Amari'i Bell, and Kasey Palmer to represent them.

The JFF President, Michael Ricketts, has confirmed that many of the players they want to call-up are already in the process of acquiring Jamaican passports.